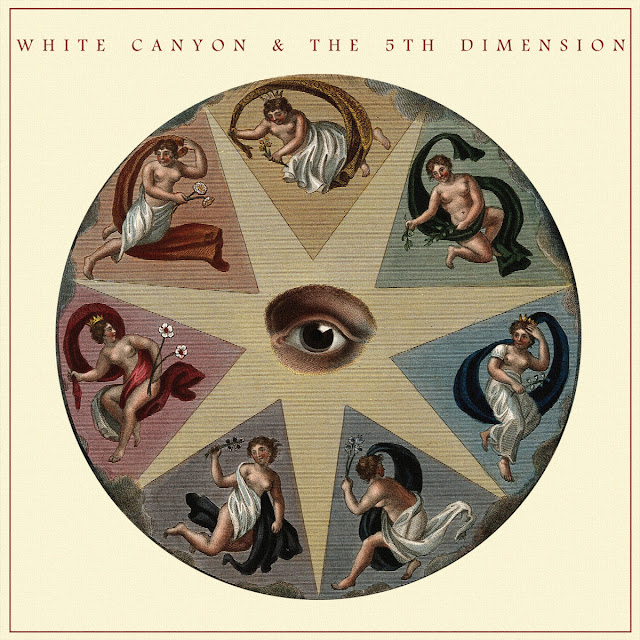 From São Tomé das Letras (a city belonging to the Brazilian state of Minas Gerais) comes the lovely debut album of the duo White Canyon & The 5th Dimension. Released very recently in digital format through the main digital platforms by the recently formed Brazilian record label Escarlete Records and with the release in physical form of vinyl scheduled for early 2020 through the Peruvian publisher Necio Records, this register of homonymous designation and ritualistic essence exudes a mystical assortment of sounds from which one can easily feel an intriguing, desert, ferocious and hallucinating Psychedelic Rock of enigmatic shamanic atmosphere, a dance, rhythmic, heated and contagious Garage Rock of lo-fi production and also a relaxing, morphine, magic and intoxicating Shoegaze of dense dreamlike involvement. His ethnic and edenic musicality - of influences pointed to references such as Pink Floyd, The Doors, 13th Floor Elevator, The Velvet Underground, Joy Division and The Black Angels - presents and pleases the listener with a seductive and astonishing Western'eana narrative - oxygenated by an intimate and minimalist ambience - that invites him to a solitary tour through the immensity of a desert immersed in the cosmic night, where the stellar furnaces palpitate and illuminate luminance, and the breath of the stars brings with it ancient prophecies. With a semi-sealed gaze, hanging head and stunned lucidity we are attracted and absorbed by a deep and stunning hypnosis from which it will not be easy - or desirable - to return. A mysterious and exquisite ceremony of occult orientation that summons our spirituality to participate in an erogenous expedition.

Sit back comfortably, breathe slowly and internalize all the messianic liturgy led by a catalytic guitar, sunk in Reverb effect and creator of sharp, sublime and consecrated chords and delirious, distorted, screaming and zigzagging soils greased and melted by THC (Tetrahydrocanabinol), a hypnotic bass of murmuring, fluid and powerful lines, a galloping tribalist drums spurred to a magnetising constancy, and two delicate, affectionate, melodious and intertwined voices that echo through the long canyons of 'White Canyon & The 5th Dimension'. This is a paradisiacal album that blurs us with a sweet ataraxia and floats us through the arteries of spirituality that flow into the nirvane sunny beaches of religious trance. A record breathed by inspiration and saturated with an enticing ancestral devotion that readily turns us into its believing apostles. Let yourselves be diluted and enraptured in this peaceful undulation that will massage you and channel you to an imperturbable and durable stadium of full well-being. A true sound therapy that will pursue and defeat all the torments of the soul, purifying and immortalizing it in a candid state of canonization. Join this sacred pilgrimage and witness in the first person all the blinding splendour of one of the most magnificent albums of 2019.