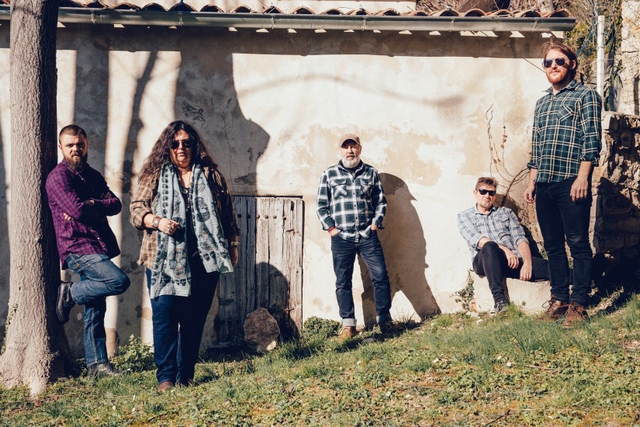 This band from Aix en Provence, France, inspire a lot of spirit who like psyche rock and dark country sound. Since 2012 we can listen on Bandcamp every LP. 2016 the last LP “Watonwan River”, a pearl, turns in a loop meanwhile the next LP, in May.


Thank you so much Diego for accepting this interview. To start, tell us how is born Jim Younger’s Spirit ? And who is who ?

I am a guitarist and a composer. Polar is the singer and she also plays the saxophone and the Jew’harp, she writes all the texts. We began in 2012 with Kino Frontera, Polar and I. Kino played the guitar, bass guitar and rhythm box  All the times we could hear “this is a good work but it would be better with drums”. Then, now we are a “complete” band with Christophe Parre the drummer and Vincent Maurin who plays guitar too.

Which are your musical inspirations to create your very good sound ?

I always liked the sound of the west coast of the 60s, The Byrds, Jefferson Airplane, CSNY… In 2012 Polar and I we left to Psy fest of Austin, and that was a revelation, the discovery of neo-psyche according to the journalistic formula, but also Texas and the story. Polar had the idea to create a theme around a minor character of the band, James Younger, the young person Jim Younger.

In your last LP « Watonwan River » what was Alex Maas’s role ?

Alex came to Polar (she is my partner) and I into the summer 2009. He was on holiday in the South Of France with a friend who had just finished his law studies. A common friend had adised him to see us. We talked a lot of things together and when we were to Austin, we went to Alex for a great Texan barbecue and into this evening, I ask him to participate in the track “bloody deeds” and he accepted it and he took the vocal lead and to mix it, it was not planned ! (laughter)

So, you have a project for May ? Can we know more around it ?


It’s more than a project, in May our new LP will be released. Our new LP called “No human tongue can tell” on the label Closer Records. You could buy Vinyl or CD, it will be 8 tracks. This LP was recorded during one year in Toulouse, Sète, Marseille, mixed to Saint Aygulf in the Coxinhell Studio and finished, as usual, at East Alliance Mastering to Canbridge Massachusetts.


Into the new LP, which is your favorite track and why ?

It’s very hard to answer… I worked so much for this LP and it’s hard to take a distance to have an objective judgment. I see more technical aspects than emotional. The track “Theirs be the guilt” that we can find into the LP “Watonwan River” was worked again and we made a new video. I am very proud about this track. But, to answer you, I think that “Misty Hills’ is my favorite track. This song is the last from the next LP and it’s like a slow dance of 70 but lyrics are very sad. I play a part of Fender Rhodes. I had in my mind “Woodstock” from Joni Mitchell and one morning in Sète, front of the sea, I listened this wonderful song and it inspired me. I don’t know that it will be the title which people will hold, but the musical part is made a success and the performance is full of emotion. I had proposed this title to Alex but he found it amazing like this with Polar’s voice and didn’t see what add more.

What is the concert which got you an emotional shock?

I think that it’s necessary to make the distinction between good concert and a concert at a particular moment into our life which will leave a memory. There are so many concerts … It s hard to make a choice… The first one who marked me, it was Michel Fugain et le Big Bazar (laughter). The first time I saw Neil Young was a great moment and recently with Bro Gunnar Jansson in Marseille.

Except music, What are your other passions ?


I like the cinema, the literature, football, but less and less because too much business. I recently subscribed to Netflix, there are lots of good series (laughter).


Thanks so much Diego Lopez for this interview. We wish you a lot of happiness for the exit of this new album. We have all our support.