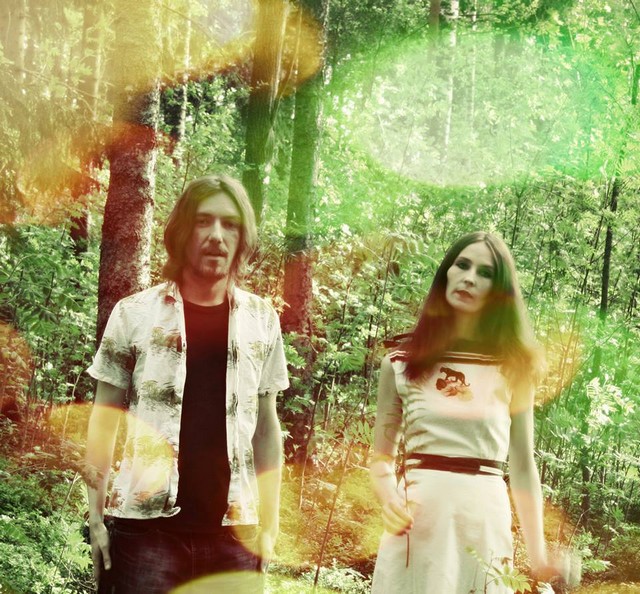 Jo Annah, thank you so much for accepting this interview. To start, let me tell you how much I love your work and your voice ! I am very happy to do this interview with you.
Tell us how is born Flying Cape Experience, and why this name for your band ?

A humble thank you Julie, this is a pleasure!

Flying Cape Experience was born about 10 years ago. My husband Mikko, the other half of our duo tried to talk me into making music, it was his dream that we'd be a band. He's been playing guitar his whole life and is a recording engineer, so making music is all natural to him. I wasn't very excited about the band thing as I thought I can't make music, because I haven't studied it or really played any instruments. I had played kantele though, a traditional finnish instrument, and also keyboard when I was little. I've always been singing a lot and consumed a lot of different kinds of music. Music has played a special role in my life as long as I can remember.

It was 2008/2009 when vocal melodies began to come to my mind, and usually the lyrics came at the same time too. Those melodies just started to flood out from my head so I thought there must be some meaning in all that, because it happened so easily and naturally. I started to record them. When I was brave enough I played my recordings to my husband, and then we started to create music together.

It took about 3 years to make the first album Let's sing more about the eyes, which was released 2013. The next album We're all gonna die was released 2015. And now we're on the edge of releasing our third album Feathers. Seems that it always takes us the 3 years process to release an album! We have released singles and a split EP during these years also.

And the name of our band…Flying Cape refers to this magical place we live in, by a big lake and the woods. It's our home. Flying Cape is the name of this place we live in, translated to english. In english it has more meanings compared to the finnish name. Flying cape can also be like an imaginary cape you can wear to go on a spiritual, emotional, magical journey inside your mind and experience many things. Music can also be your flying cape taking you to different places. I hope our music can take listeners to a journey inside their selves or into other worlds.

You are working your third album, can you, please, tell us more about it ?

The new album is called Feathers. It's mostly a very emotional album.
There is a lot of big emotions: grief, fear, depression, loneliness, gratitude, love, comfort, fulfillment…Spirituality is there, not in a religious way, but more like of one's subjective experience of sacredness in life…supernatural also.

There's a wide range of feelings of a vulnerable human being, who could be anyone of us.

There are stories of life, moments that go by fast, situations anyone of us could face in their lives, for example losing someone you love, or waiting to see your loved one. Love is the leading theme on this new album.

We were a little different with this album. We used mellotron plugins and strings and an old harmonium, which we haven't done before. I personally enjoy a lot of earthy and natural sounds even if they are made with computer, even if the music is mostly electronic like ours. There's acoustic guitars and keyboards, some real percussions. Mikko has made a lot of sounds experimenting, creating layers, ambience. We both love that kind of spheres, soft and safe and beautiful, dreamlike, otherworldly.  So, I think our sound is still something people can recognize as Flying Cape Experience. There is dreampop, shoegaze, psychedelia, ambient, folk…a mixture of many things once again.

The release of our third album has delayed delayed delayed….because of not having enough time…as we make everything by ourselves: composing, recording, mixing, mastering, album art, promoting etc. It's a lot of work!

…but, we will release Feathers this year and we are very happy for that.

We have already released singles from the album, for example No lies. It is actually one of the first songs that was born in my head.

We both do. Usually the vocal melodies come first from my head, then I usually grab a guitar and/or keyboard/synth to find the right chords/sounds with the vocals. Then I introduce it to Mikko and if the song is more technically challenging he plays the guitar. The rest of making the song takes the longest time: the arrangement. That is the real work part, and painting the atmospheres and so on, catching the right moods, sounds, spirit of the song.

What are your inspirations ?

Life itself, death, feelings, relationships between people, nature, spirituality, psychic things, all the beauty in life around us…

I listen to music very little these days. It's usually some old albums I listen to, grunge and brit-pop from nineties, or sometimes Massive Attack or Tool, Elliott Smith or Beck. Sometimes Bad Brains or Culture, Beastie Boys, sometimes skate punk and sometimes hc techno. It depends on my mood.

Some of the newer artists that I like a lot are Prana Crafter and The Stevenson Ranch Davidians for example.

2014 your worked with Joaquim Barato? How took place this meeting ?

We met on Facebook a little after we had released our first album. I really liked his emotional, sensitive and kind of raw interpretation. It made an impact on me, his honesty in expression. You don't see that much in music nowadays.
We have released our music through his indie netlabel El Vals del Conejo. We also made a split EP 8 with him, four songs each. Both also made a cover of the other artists song, which was really fun to do! Joao made a beautiful cover of our song The Cage and we covered his song Rivers in the sky.

I am a very creative person, I couldn't live without always creating something. I paint and write and photograph, and I sew and knit and make jewelry…I love experimenting things all kinds.  I like to upcycle/recycle things, make something new out of something old. This world is so full of waste and stuff, so I rather try to re-use old already existing materials to create new things/products.

And I love watching reality TV! I do it as a personal research of human nature, this society/world we live in, not just for entertainment. I've studied media culture before, so I guess the interest comes from there. There's this need to understand and see the deeper meanings in things. People are basically the same every where in the world, everyone experiences same kind of feelings and only love matters in the end.