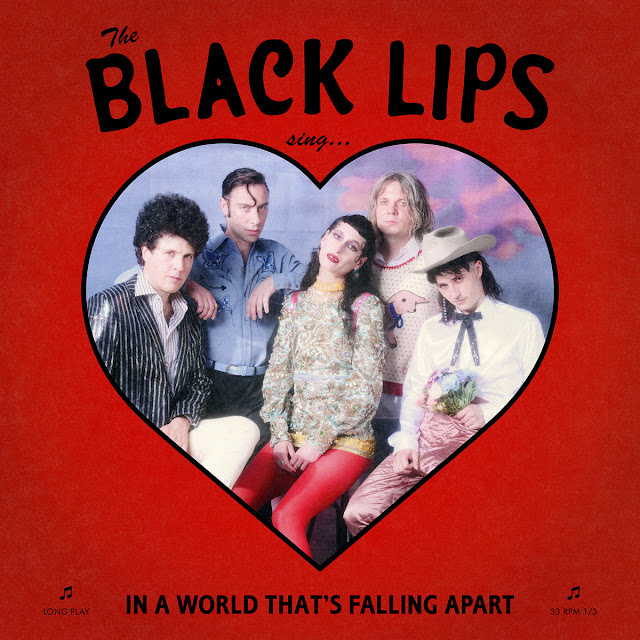 Atlanta underground rock provocateurs Black Lips have announced that their new LP The Black Lips Sing In A World That’s Falling Apart is set for release January 24th on Fire Records/Vice. Boasting an unapologetic southern-fried twang, the twelve-track collection marks the quintet’s most pronounced dalliance with country music yet, with a clang and harmony that is unmistakably the inimitable sound and feel of the Black Lips. While the songcraft and playing is more sophisticated, Black Lips were determined to return to the raw sound roots that marked their early efforts. Recorded and co-produced with Nic Jodoin at Laurel Canyon’s legendary, newly reopened Valentine Recording Studios (which played host to Beach Boys and Bing Crosby before shuttering in 1979) without Pro-Tools and other contemporary technology, the band banged the album out directly to tape quickly and cheaply, resulting in their grimiest, most dangerous, and best collection of songs since the aughts.


Like The Byrds, who flirted with pastoral aesthetics before going all-out with the radical departure that was Sweetheart of The Rodeo, the Black Lips have been skirting the edges of country since “Sweet Kin” and “Make It” from their eponymous debut. But eschewing Graham Parson’s earnestness, Black Lips are careful not to hint at authenticity, wisely treading into their unfeigned rustic romance with the winking self-awareness of Bob Dylan’s “You Ain’t Goin Nowhere,” Rolling Stones “Dear Doctor,” or The Velvet Underground’s “Lonesome Cowboy Bill.”

The band’s stylistic evolution and matured approach to musicianship and writing is, in part, due to the seismic lineup shifts they have undergone over the last half-decade. Worn down after a decade of prolific touring and recording, longtime guitarist Ian St Pé left the group in 2014, followed shortly thereafter by original drummer Joe Bradley. Jeweler/actress (and now Gucci muse) Zumi Rosow, whose sax skronk, flamboyant style, and wild stage presence had augmented the team before the duo’s departure, assumed a bigger writing and performance role in their absence. Soon drummer Oakley Munson from The Witnesses brought a new backbeat and unique backing vocal harmony into the fold. Last year the quintet was rounded out by guitarist Jeff Clarke of Demon’s Claws. The newly forged partnership, all of whom collaborate as songwriters, vocalists, and instrumentalists, has breathed new life into their sound. The result is akin to the radiance of the impulsive, wild nights where you find yourself two-stepping into the unknown.