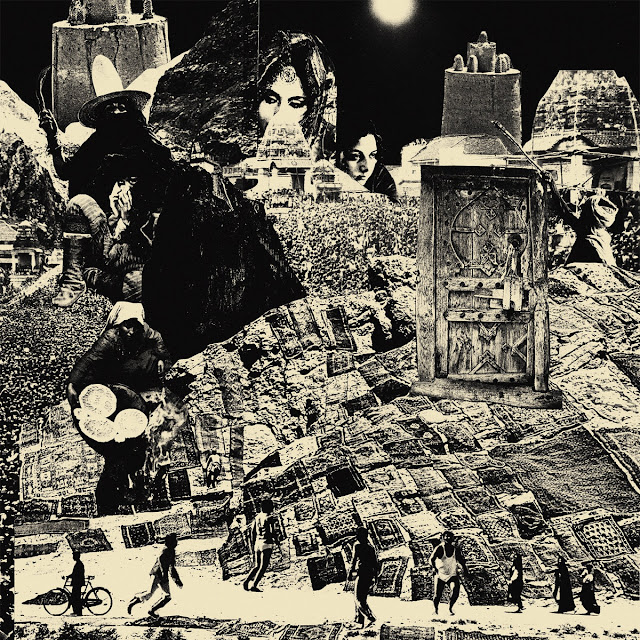 You can see what you want to see when you stare in to the world of The Myrrors, and to some degree, you can also hear what you want to hear on their expansive, extraordinary new album, “Borderlands” – an album that nominally references the collective boundaries we draw, all the while offering a soundtrack for setting forth strategies that either ignore or erase our self-made barriers.

If you see The Myrrors as the dust-caked disciples of a specific strain of desert-drone mysticism, there’s little on “Borderlands”, their fourth full-length Myrrors album released in as many years, to dissuade you from that vision. Instead, there’s only confirmation—an intoxicating combination of outlook and output that clarifies and crystallizes the band’s many sonic strengths throughout the album’s fantastically unfolding forty-plus minutes.

Often ominous in its ambience, “Borderlands” begins with an appropriately Albert Ayler-ish blast of “Awakening,” which serves as a short, slumber-shattering introduction to “The Blood That Runs the Border.” Here, The Myrrors sound somewhat haunted and heartbroken, while nevertheless driven and determined. It’s a crestfallen crusade of sanguinary sound that spreads across the album as a whole, an impression powered in no small part by the echoes of dervishes danced by Sufi mystics in centuries-old efforts to open other borders, as it were. This dynamic dance of conflicting emotions finds its contours on tracks like the meditative “Biznagas” and the propulsive “Formaciones Rojas”, which, for all of their otherworldly-ness, wouldn’t be tremendously out of place if described as an outtake from Dylan’s “Desire,” recalling the genius contributions of one Scarlet Rivera.

However, for sheer atomic mass, the beating heart of “Borderlands” must be the album’s final, twenty-one minute excursion to the center of the territory that The Myrrors seek to map—namely, “Note From the Underground,” a Dostoyevsky-referencing drone that wordlessly reflects on that book’s less-than-optimistic tone:

“In any case, civilization has made mankind if not more blood-thirsty, at least more vilely, more loathsomely blood-thirsty … now, we do think bloodshed abominable and yet, we engage in this abomination, with more energy than ever. Which is worse? Decide that for yourselves.”

Decide for yourself what you want to see in The Myrrors.

-Ryan Muldoon (@RevoltoftheApes)
Beyond Beyond is Beyond Records