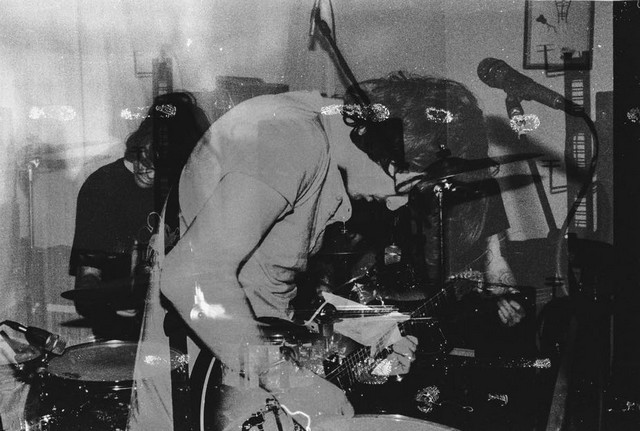 Seattle based three-piece Spirit Award are known for their unique mix of sprawling stereo guitars, stunningly moody soundscapes and a driving drum and bass foundation. While Spirit Award are aptly capable of generating catchy psych moments, there seems to be no calculable formula to their writing style. Comprised of Daniel Lyon, Chris Moore and Terence Ankeny, the trio’s mutual goal in creating a sound with grit and authenticity is clearly evident throughout their music.

Following the success of their debut album Neverending, Spirit Award are ready for their next chapter with the highly anticiapted release of Muted Crowd.
Produced by Trevor Spencer (Father John Misty, Fleet Foxes), the release draws inspiration from Seattle - a changing city where musicians and artists are at a constant struggle to survive. Muted Crowd highlights the band’s signature style of expansive and enveloping soundscapes, offering an almost therapeutic quality. Ankeny admits, "Our influences have been pretty diverse lately - post punk, Krautrock and 70’s punk to name a few. I think we’re trying to achieve an amalgamation of different sounds of this one, more so than the last one. More of us swapping instruments and adding sounds and ideas we’ve never fully explored before".

Spirit Award have found success receiving critical acclaim from tastemakers such as Billboard, KEXP, EARMILK and Daytrotter, among others. The three-piece continue to enthrall audiences with the release of Muted Crowd.