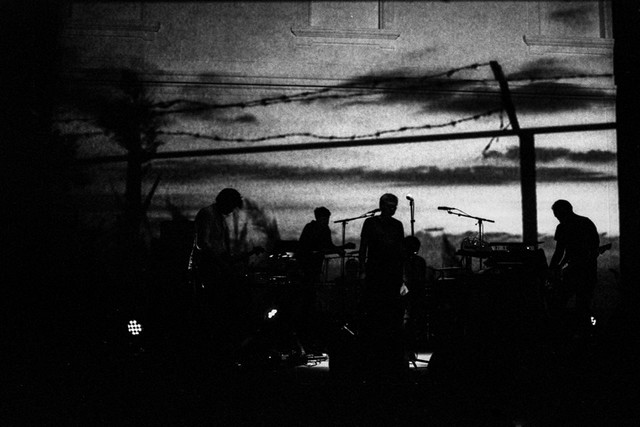 TARAB (in literary arabic - euphoria, secular exaltation, ecstasy) is the result of live recordings captured during the AL-'AN! tour which led the group, after a preliminary residency at l'Autre Canal in Nancy, to cross Europe and into Canada, performing at the prestigious festival Le Guess Who? in Utrecht, opening for Suuns & Jerusalem In My Heart in Montreal and Toronto, following the same Jerusalem In My Heart through France then from Brussels to Berlin, and finally closing the loop at the Irtijal festival in Beirut. A record, rooted in the soil, hypnotic in pulsation, TARAB is a meeting of the Parisian founding members Frédéric D. Oberland and Stéphane Pigneul, electronic sound wizard Mondkopf, G.W.Sok from The Ex, Sylvain Joasson of Mendelson, videographers As Human Pattern and the Lebanese musicians Charbel Haber, Abed Kobeissy and Ali El Hout (aka Two Or The Dragon). The studio pieces are here stretched, deconstructed and rearranged while new works from the road , poems 'Grasse Matinée' by Jacques Prévert and "Tuesday And The Weather Is Clear "by Mahmoud Darwish, find unique musical settings, weaved, twisted and reimagined.