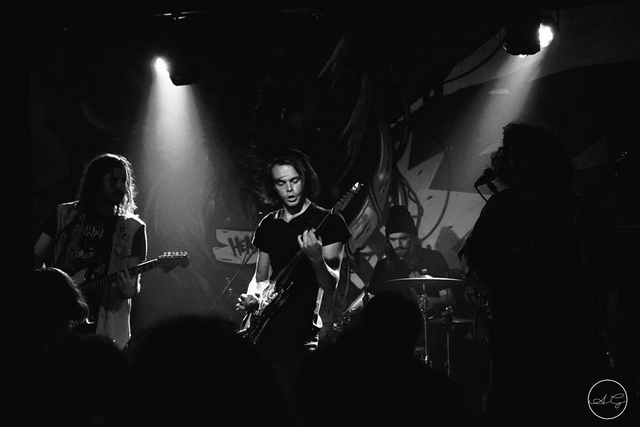 The band consists of Nicolaas Rossouw (Drums), Andre Vlok(Guitar,backing vocals)Stuart Dods (Bass, Vocals) and Richard Liefeldt (Vocals, Guitar). Formed in 2014 in the small town of Hermanus, the band has now relocated to Cape Town and become part of the growing Psych/garage/surf scene. They have consistently toured South Africa for the past 3 years growing their fan base and honing their craft and preforming at festivals such as Rocking the Daisies, Mieliepop, Lush, Smoking Dragon, Endless Daze, Malkop.

Six months after forming the band, they recorded their debut album, ‘Youth is like a Loaded Gun’, which was released to much acclaim in the underground scene, with the songs ‘James Dean’ and ‘Blasphemy’ being the high points of the record. They have progressed quickly from the ‘classic ‘ rock genre into a more surf-rock/garage psychedelic sound, which can be heard on their latest record, ‘Creatures of the Black Desert’, which was released to much praise in the middle of 2015. The FUSS magazine calling the album, “one of the best Psychedelic albums to ever come out of South Africa”.
In 2016 they released the single, ‘Feel Alright’, and filmed a music video in the Tankwa Karoo desert with Barry de Villiers of Roundabout Films. It debuted on DJ Fresh’s morning show on 5FM and received rave reviews.
In 2017 they released their 3rd full length album, ‘Just Relax’, with the lead single, ‘Come On Baby’, and has received critical acclaim from independent music sites such as The Fuss and Texx and the City.

With their growth as a band, their shows have progressed into more of an art-punk explosion with elements of psychedelia and garage rock with influences ranging from Night Beats to the Black Rebel Motorcycle Club.